Many people won’t recognize the breed we are talking about with the name “Dachshund”, instead, it is mainly known by its gastronomic nickname: “Sausage Dog” or “Wiener Dog”. Its peculiar physiognomy comes from a genetic mutation, which gives the specimens short limbs according to their body’s size.

The Dachshund, has 3 varieties depending on the thoracic circumference measured at the age of 15 months:

Each one of these size varieties may have these types of coat: 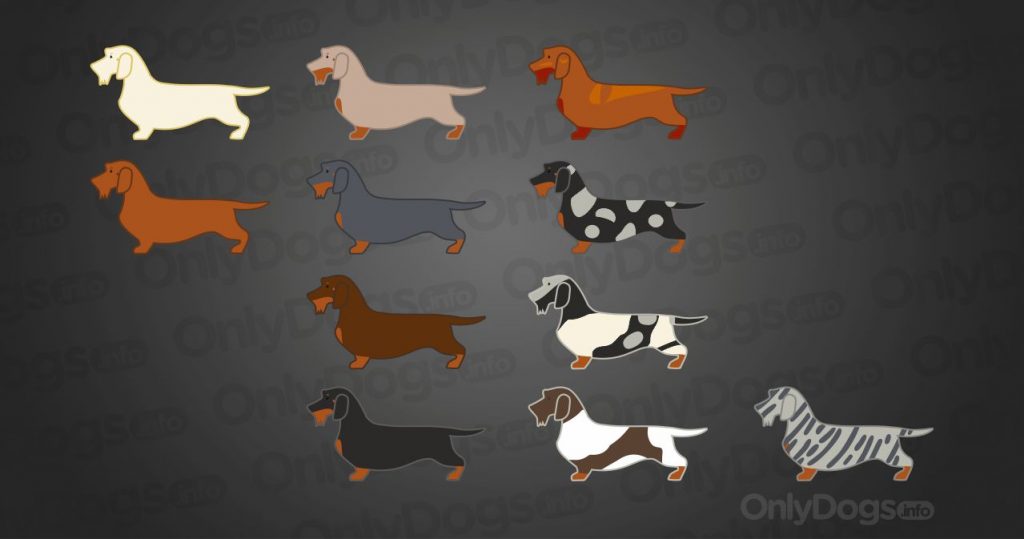 The German Dachshund, also known as Dackel or Teckel, has been known since the Middle Ages. To get as a result dogs capable of hunting underground, there were done many crosses between different types of hounds. The Teckel was impulsed by these short-legged dogs, and were finally recognized as one of the most useful hunting breeds. It has also accomplished achievements on land; barking without weakening while following the track, searching and following hurt preys. The oldest Club created dedicated to Teckel’s breeding is the “Deutsche Teckelklub e. V.”, and was founded in 1888. Dogs with congenital eyes’ and ears’ conditions, so like the ones which have epilepsy seizures, are undesirable and removed from breeding. The Teckel has been bred in three different sizes (Standard Teckel, Miniature Teckel, and Kaninchen Teckel) and in three coat varieties (smooth-haired, long-haired, wire-haired) for decades. 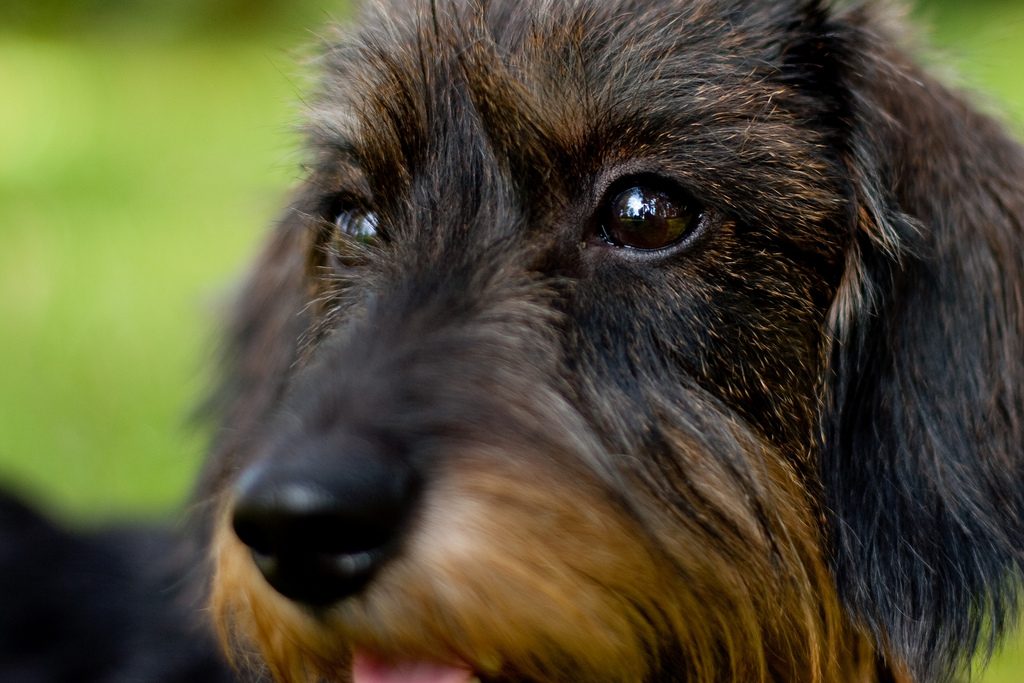 There are two sizes for Teckles: the miniature, which weighs less than 5kg, and the Standard, which weighs more than 5kg, but generally between 8 and 9 kg.  In Germany there is a third size named Kaninchen teckel, which depends on the thoracic circumference measured at the age of 15 months.
There are three coat varieties: the Smooth Haired, the Long-haired and the Wire-haired. In the United States the most popular variety is the Smooth-haired Standard Dachshund.

In the three coat varieties, the same colors are recognized:

Single-colored dogs: red, red-cream, cream; with or without black markings. White is undesirable, but it is not disqualifying to have small white markings. The nose and the nails are black, but tan is also allowed. 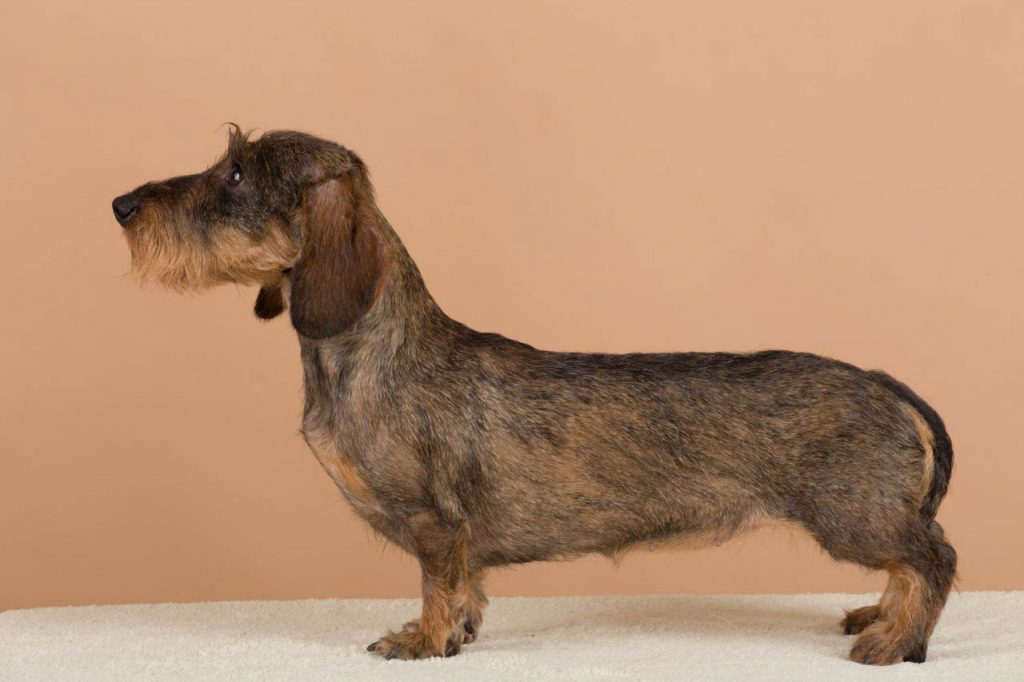 Tan pointed (double-colored): Deep black or chocolate; they must all have tan or cream markings over their eyes, on both sides of the snout and on the lower lip, inside the ears, on the forechest, on the back and front quarters, on their paws, around the anus and from there to 1/3 or the half of the lower part of the tail. The nose and nails must be black in black colored dogs; in chocolate colored dogs, the nose and nails are also chocolate.

Brindle dogs: The base color is always dark (black, tan or grey). Beige or grey markings are undesirable. None light or dark color should predominate. The brindle color has darker stripes if the base is tan or cream. The nose and nails must be single or double colored. 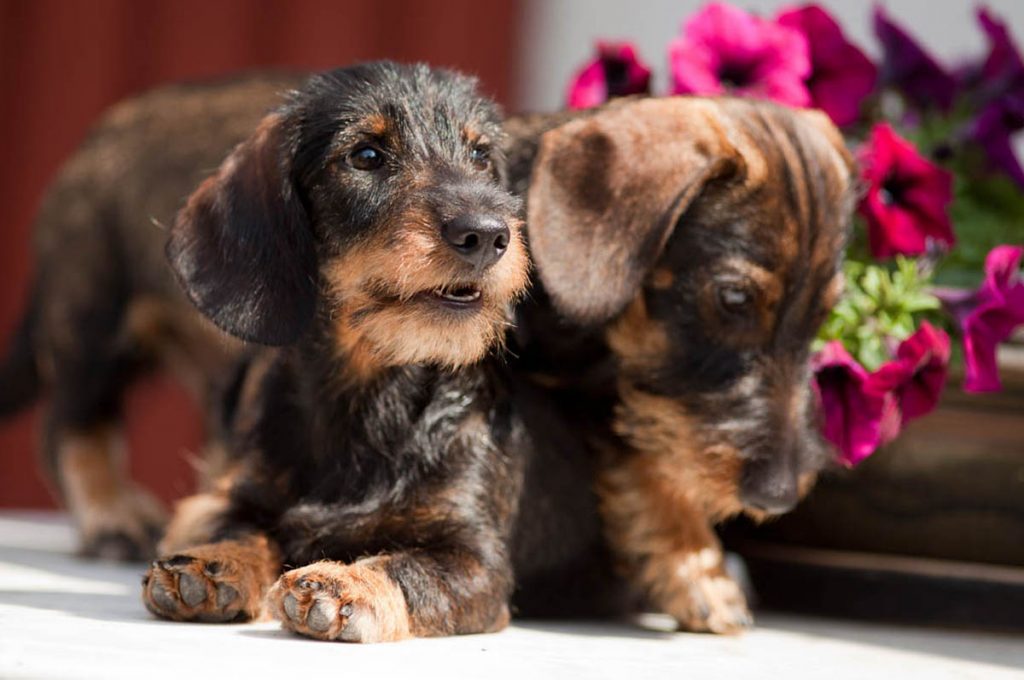 These are friendly, affectionate and playful dogs, which love to spend time playing no matter how old they are. For that reason, it is not recommended to leave them alone for much time, because they may damage furniture or any other object.  These are passionate, persistent, agile hunting dogs, with a good sense of smell. Son

The Teckel is a very intelligent dog which learns quickly, and as a puppy, is stubborn as many other breeds. All dogs tend to dominate and to be the leaders of the pack; and the more intelligent they are, the harder they try. Once they understand who is the leader in the pack they tend to be docile, affectionate, protective, submissive (but not much), and playful as well.

These dogs are well-known for being great pets, especially suitable for small houses because of their small size and good temperament.

Although it does not demand much attention, it is necessary for this dog to be taken out for a long walk frequently so it can develop a good musculature on its shoulders and back legs. In that way, the Teckel would get a better constitution and strengthened its muscle mass, and as a consequence, it would reinforce its spine’s structure, which is very long and could cause problems to the specimen. It is suggested for them not to go up or down the stairs; to go up or down the sofa or bed; or to constantly jump while greeting or looking for attention.

The breed is prone to spinal problems due in part to an extremely long spinal column and short rib cage. The risk of injury may be worsened by obesity, jumping, rough handling, or intense exercise, which place greater strain on the vertebrae. To prevent them from getting hurt, it is recommended for them no to go up or down the stairs. As time goes by, it is more obvious that these problems are hereditary, and breeders work on the breed’s improvement.

On the other hand, Teckel’s feeding is also extremely important. If it is given a lot of food, the dog will get fat and that will limit its movements; and as a consequence it will have back pain and, as the years go by, serious problems on its spine and disc herniation.

Although this breed eats meat as all the others, it does not mean it has to be fed with this all the time. It is recommended to feed the Dachshund with balanced nourishment with high protein and vitamin levels, which help its healthy development.